Have you ever been confronted with a perception of a situation that is off the mark or even completely false? I find this to be very upsetting and frustrating. For example, whenI see news report of soldiers from the Israel Defense Forces portrayed in various propaganda outlets in a negative light, it is very upsetting.
The question though is, do we just dismiss this perception as foolish and basically do nothing or do we have to be proactive in combating these false perceptions ? 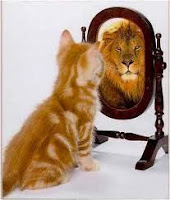 I think we see a fascinating lesson from this weeks parsha regarding this. The Torah emphasizes in the first verse of the parsha not once but twice that Isaac was the son of Abraham. Rashi explains the necessity for this. It so happens to be that for many decades that Abraham and Sarah were married and they were unable to have kids. Once Sarah was kidnapped by a tribal king named Avimelech and spent the night in his palace. Avimelech was afflicted with an illness and decided to release Sarah. Shortly after, Sarah was starting to show signs of pregnancy. All the tabloids and late night TV shows started whispering rather loudly that Avimelech had fathered the child that Sarah was carrying. G-d made this special miracle that their son Isaac looked identical to Abraham.
I have often wondered, why did God go to such great lengths to prove the tabloids wrong? Who cares what was being written in the gossip columns or in the monologue of the late night TV shows? Why respond to such pathetic allegations?
I think we learn from here a very important thing about how to deal with a false perception. We must be proactive in combating these perceptions before they take a life of their own. We must articulate why they are false and then make the case for what is the correct version of the events. As King Solomon wrote we must find grace in the eyes of God and Man. Of course, Man cannot be compared to God. Yet, there is a mandate for us to demonstrate that all of our actions are ethical in the eyes of Man and if there is a false perception – we must take the pains of correcting this.
If God felt this was important with the allegation about the identity of Isaac’s father – what can we say?
Please share your thoughts.

There have been a handful of books that have made a significant impact on me in the journey of life. One of those is Let There Be Rain by Ra...